Sticks and Stones and Off-Grid Homes: How to Realize Your Dream of Full Independence

Preview: Curious about how to live off the grid? Here’s practical considerations and first-hand experience in how to find property, build a home, and live off-grid. 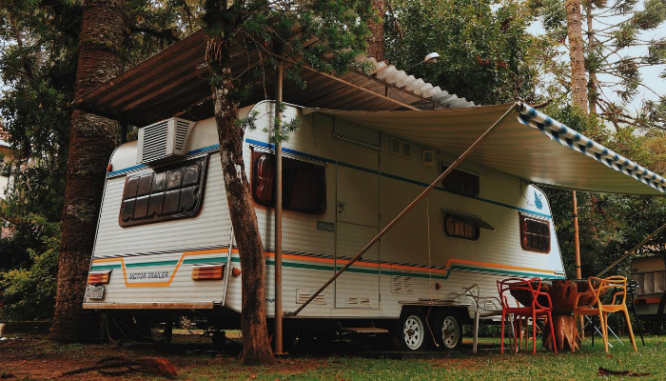 For generations of Americans, the single most potent symbol of having “made it” is homeownership. It symbolizes financial salience, stability, independence, and permanence.

If you take that logic and amplify it, one-up the financial salience and boost the independence, the next step up is homeownership off the grid: your land, your house, your terms!

Do you dream of this lifestyle? You are not alone. Interest in living off the grid has kept pace with advances in solar power technology and the potential for many workers to perform their daily tasks from home.

What do you need to know? How do you actually live off-grid? You’ve got the vision and the drive, but what are the practical realities of this lifestyle?

We dug deep into practical aspects and spoke with a couple of people with first-hand experience building, living, and thriving off the grid.

What exactly is ‘the grid’ — and what does it mean to be off it?

The grid is a term used to broadly describe cities and suburbs and the power, water, and waste services that support them. It follows that property off the grid lies outside city limits, and beyond the reach of municipal or county water, electric, or waste systems.

To be off the grid means you create and maintain the systems and comforts that city dwellers simply pay for.

One size fits one

There are as many ways to live off-grid as there are people who chose to do so.

Some decide to go fully off-grid, with no electricity, using an outhouse and collecting rainwater in a cistern. Others might use solar panels with a generator and stored batteries to handle electricity, install a septic system and well, get satellite internet, or just pay for cell phones.

How in the world does it work?

Even if you find the idea of using an outhouse or collecting rainwater unbearable, off-the-grid living might still be right for you. In recent years, massive advances in technology have made it possible for off-the-grid living to be nearly as comfortable as life on-grid. Creative, elegant, and robust solutions to the problems of meeting basic needs have been established and well-tested.

The main issues to solve when you’re off the grid are power, water, waste, and connectivity.

For the most part, if you don’t have a power line pouring electricity into your home, you’re using solar power. Other options are available, like wind and micro-hydropower, but these are less dependable, more reliant on specific geographic features, and generally more expensive.

If you decide solar is right for you, it is critical to get an expert on board right away. Building an effective solar system is not as simple as slapping a couple of panels on your roof. Careful considerations must be made when you’re scoping the property for new home construction.

Access to water is an obvious must-have for an off-the-grid dwelling. You must choose a site that has some source of water, or collecting and storing water will become a major part of your life.

Depending on how far you are from the grid, you may have to either lug your garbage to a shared collection point, or arrange a pickup from a residential waste service.

Whether you decide on an outhouse or a septic tank, sanitation is critical and should be overseen by experts.

Being off-grid and offline can be dangerous.

Consider this: if you’re truly off-grid, you have no landline. There will be no daily paper chucked on your lawn, and you won’t hear local gossip or headline news at the coffee shop.

Being able to reach for your cell phone to call for help in case of fire or medical emergency could quite literally be the difference between life and death. Decent cellular service is imperative, and luckily most of the U.S. is covered by one service or another.

Some people would be delighted to break away from the internet, but many people need to be online. If you work or attend school remotely, you simply must have a strong internet connection.

So you’ve got some idea of the work it takes to set up and maintain a life off the grid, but what is it like when you actually get there? We spoke to two off-grid homeowners who offered their take on life off the grid.

Now settled in Seattle, BG Takett is a geologist by training and vocation. He has a sweeping span of life experience that makes him uniquely qualified to have built a home and lived off the grid for years, often totally alone. He’s a trained survivalist, a whitewater river guide, a builder, a chef, and an artisan. Put simply, he’s the off-grid type.

Tackett is a co-owner of a property near the geographic center of Nevada. For anybody plumbing the depths of their memory for a landmark in the middle of Nevada, we’ll stop you now: there isn’t one.

Tackett’s property is in an expanse of shrub and craggy, lunar-esque features, 30 miles from the nearest town. Tackett does not hunt or grow food, so trips to civilization for supplies, and sometimes a cold beer and a hot meal, are made monthly.

This property was chosen, in part, for a singular, spectacular amenity: a natural hot spring flows up from the ground at 150 degrees Fahrenheit at a rate of 40 gallons per minute. The water is perfectly potable, and in cooler pools a few hundred feet from the 150-degree source, delightfully soakable.

A self-described “salvaged wood junkie,” Tackett built his home from reclaimed lumber (mostly old-growth redwood from California) he hauled in, truckload by truckload. Though his skill set could easily tackle these tasks, he’s opted to not install solar power, running water, or even radiant heating.

For Tackett and his guests at “The Ranch,” there is significance in living simply. The sun goes down? Time to settle in and go to sleep. The sun comes up? Time to get moving.

Tackett recommends buying your land outright, if you can afford it. The decision to pool resources with friends and build from reclaimed materials means that he hasn’t had to secure any funding to realize this dream.

Near the redwoods of Mendocino National Forest, it took six years to build the off-the-grid home Yvonne Winter loves. She hired an agent to find the site, worked with an architect to design the space, secured financing with a bank, and had contractors built the home.

Winter moved off-grid because she wanted to live in nature, and she liked the idea of being independent from California’s electric and gas utility, Pacific Gas and Electric (PG&E). The only regular services she is reliant on are propane delivery, her cellular phone and hotspot, septic service once every 5 to 10 years, and well service as needed.

Because she wanted both kinship with nature and modern comforts, her home has a robust solar system that more than covers her needs. About her power needs, she says, “I never even think about it. I have as much as I want, whenever I want it.”

This abundance came at a price, though. In addition to what she paid out of pocket, it has been necessary for her to become a self-taught solar system repair person. She knows her watts from her volts and can troubleshoot most of the issues she runs into.

Winter experienced an unexpected two-for-one setback with her solar power system during her first summer in her home. Unfamiliar with residential solar, her builder botched the installation. His mistakes weren’t discovered by the home inspector, who also lacked knowledge. It wasn’t until things stopped working that she knew there was a problem. And so began her education, “kicking and screaming,” in off-grid solar technology.

Only 20 minutes from the closest town, Winter does not hunt or grow food. Even ornamental plants are on the menu for the woodland creatures with which she shares her yard, so offering a full buffet of planted edibles would require her to invest time and energy in defending her crops — time she’d rather spend with her grandchildren or a weekly trip to the store.

Don’t fence me in

The off-the-grid home represents a dream within a dream. It is the pinnacle of independence, self-reliance, and good ol’ American gumption.

Tackett and Winters have this in common: their experience building and living off the grid was immensely enlightening. As much as they were eager to discuss ins-and-outs and how-tos, they also wanted to share lessons beyond the logistics.

They want people to know you don’t come out of the off-grid experience the same person you went in. Tackett says, “It is the doing of the thing that makes us who we are, not the outcome.”

With every stick of old-growth redwood hauled in by Tackett, with every “kicking and screaming” crash course in solar tech mastered by Winters, these two weren’t just doing something, they were becoming something.

And what they became was not governed by convention. They grew away from perfectly square property lines on a perfectly square city block. Their growth, marked by adaptation, insight, and transformation, was truly off-grid.

–Shared with love by the Valmy Team. All content copyright by the original authors.