Homeownership is still a hallmark of the American Dream, yet the opportunities aren’t equal for all. Learn how interlocking oppressions play out in real estate. —-

Homeownership is still considered a major hallmark of the American Dream, and it’s one of the most important ways to build wealth. Yet the opportunities of homeownership don’t play out evenly for all, which lead to wealth gaps that are driven by interlocking oppressions in real estate.

And for people with multiple levels of marginalization — or those facing interlocking oppressions — the effects of that inequality are especially pronounced.

We’ll walk through the basics on interlocking oppressions, and the latest research on how they can play out in real estate. Here’s what Americans need to know.

What are interlocking oppressions in real estate?

You might be wondering, “what does all of this interlocking oppression stuff have to do with real estate?”

Interlocking oppressions can have real-life consequences for homeowners across the U.S. Let’s look at some numbers that indicate how this theory plays out when it comes to how much we earn, where we live, and the wealth we accrue as a result.

Income levels by race and gender

One big way we can see interlocking oppressions play out is through disparate levels of earnings.

For example, it’s a commonly cited statistic that women earn roughly 79 cents on the dollar compared with men (though more recent studies find that gap to be more like 82 cents on the dollar). But for Black women, median earnings are actually much lower.

Here are median income levels by race and gender: 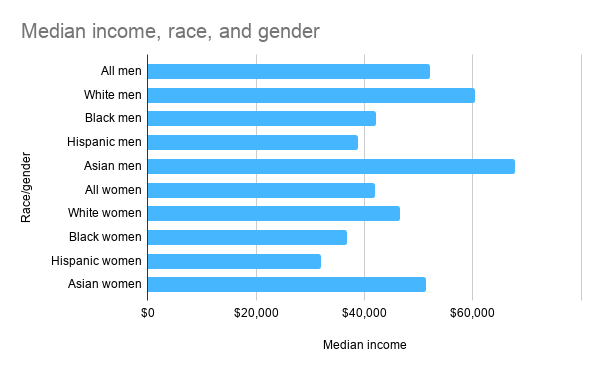 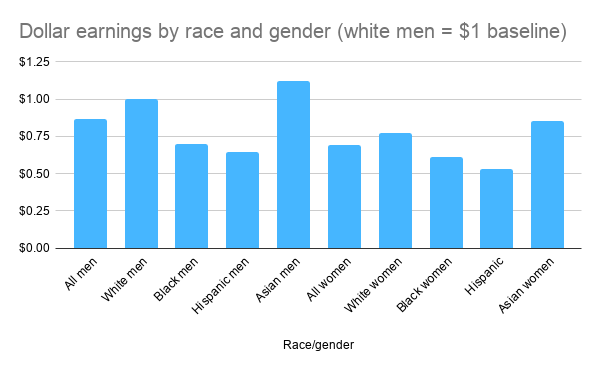 The impacts of disparate income levels

Disparate income levels can have huge consequences for people who face multiple levels of marginalization, affecting their ability to build wealth over time.

Homeownership rates can also tell us a lot about who gets access to the American Dream, and who gets left behind.

For example, research shows that Black people buy cheaper first homes (and take on more debt doing it), buy homes later in life, and are less likely to sustain homeownership over time.

Ultimately, these factors — along with widespread structural inequality across the real estate industry — make it a lot more challenging for Black people to build wealth through homeownership.

Again, it’s important to keep in mind that homeownership rates aren’t everything. While women may be making strides when it comes to buying homes, it turns out that there’s still a gender wealth gap when it comes to actually owning homes (more on that in a bit).

Income levels and homeownership rates can illustrate a lot about interlocking oppressions, but it’s also important to look at how homes hold value and appreciate over time.

Think of it this way: if you own a home and it majorly drops in value — as many homes did during the Great Recession —  that’s going to affect your entire financial picture. Your home is likely your biggest investment. For it to be a good investment, it should appreciate in value over time, making you wealthier as the years pass.

But what if your home was worth less because of your race or gender? That’s the reality for millions of Americans.

This is another area where levels of marginalization come into play, and outcomes vary drastically from one group of homeowners to the next.

A study by the Brookings Institute found that Black neighborhoods — or those where the population is more than 50% Black — are valued at around half the price of homes in white neighborhoods with no Black residents.

So just how many Black people are affected by this devaluing of Black property? Currently, 37% of Black people in the U.S. live in neighborhoods with a Black majority, so this has massive effects on Black wealth.

The study also found that “Homes of similar quality in neighborhoods with similar amenities are worth 23% less ($48,000 per home on average, amounting to $156 billion in cumulative losses) in majority Black neighborhoods, compared to those with very few or no Black residents.” 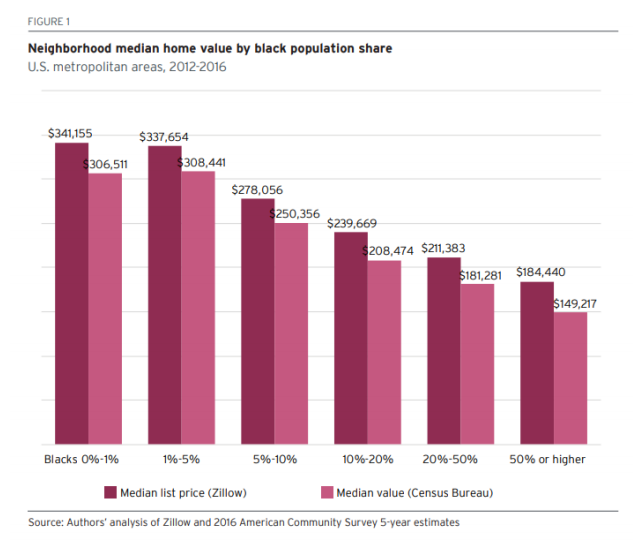 Source: The Brookings Institute Know Your Price: The Devaluation of Residential Property in Black Neighborhoods.

This home value disparity is also found to limit upward mobility for Black children who grow up in these communities, creating generational barriers to wealth.

Home appreciation is not equal across races

Home appreciation is another important factor to look at because it helps show how much wealth a homeowner can build as their investment grows.

A study by the American Center for Progress found that even as home prices have appreciated nationally since the Great Recession, racial disparities in home appreciation persist.

According to their findings, homes in Black neighborhoods have depreciated 6% since 2006, while home prices in white neighborhoods increased in value by 3%. The home appreciation disparity is apparent, even when controlling for the homeowner’s income levels. 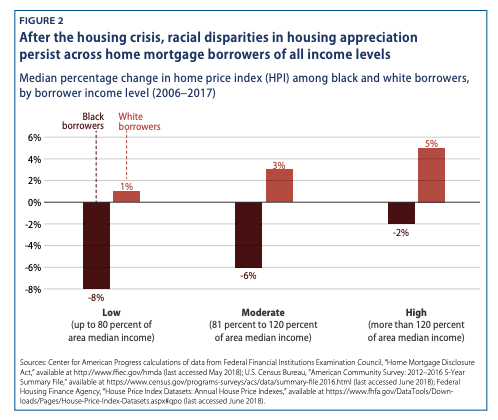 Home value and appreciation by gender

Remember how single women are buying more homes than single men? Unfortunately, they’re not seeing the same return on investment.

A recent study by Yale found that “single women see significantly lower returns from buying and selling real estate than single men, losing out on an average of $1,600 per year.”

The study revealed that single women pay around 2% more for homes than single men, and when they sell, they get 2% less. That means single women get around 1.5% less in annual returns on their home purchase. And although these may sound like small numbers, they can really add up over a lifetime — especially when compounded with lower pay.

“Housing represents the largest category of household saving,” Kelly Shue, professor of finance and one of the co-authors of the study, explains. “It accounts for a greater fraction of total retirement savings than stock investment. Therefore, to lose any percentage on housing really impacts the gender gap in wealth accumulation.”

For example, one way lower home values play out is through discrimination in home appraisals.

According to The New York Times, Abena Horton, a Black woman, welcomed an appraiser to set a value for the home she and her husband Alex were selling.

The home was expected to appraise at $450,000, yet the appraisal came back substantially lower, at just $330,000. Horton immediately suspected discrimination, and she ordered a second appraisal. This time, though, she asked her white husband to greet the appraiser, and Horton left to run errands with the couple’s young son.

This is one of the many insidious ways homes are devalued for marginalized groups of people.

Owning a home is one thing, but building equity in it is quite another. Equity is how much value you actually own in the home. More specifically, home equity is calculated as the property’s current market value, excluding the outstanding balance of all loans on the property.

Home equity is a big way Americans build wealth over time. But as with the other data we’ve looked at, equity plays out differently for different groups of people.

We can see that Black and Hispanic homeowners have substantially less equity in their properties than white and Asian homeowners.

And this Urban Institute data shows us that not only is there a racial home equity gap, but there’s also a massive wealth gap, too: 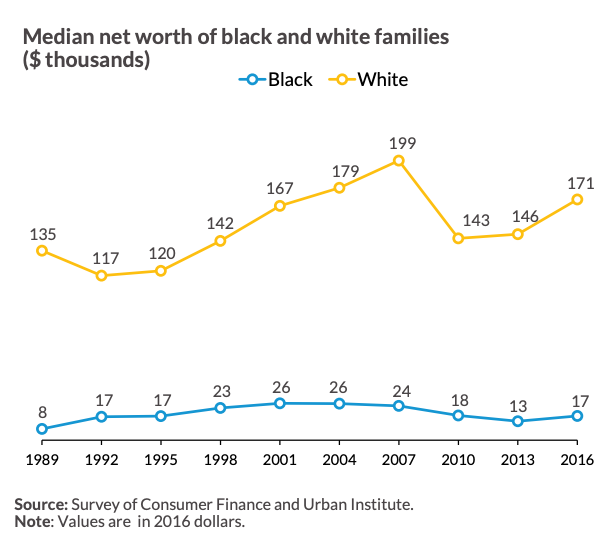 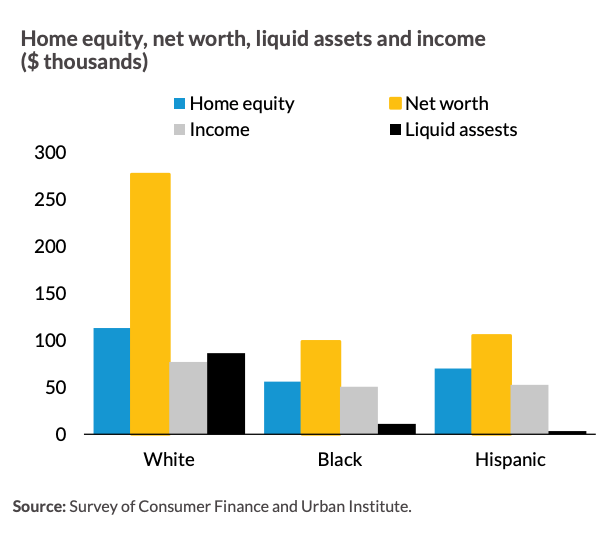 “For black homeowners, home equity represents a greater part of their net worth than it does for white homeowners,” explains a recent report by the American Center for Progress.

They go on: “Center for American Progress analysis of Federal Reserve data indicates that primary residences account for 58% of African Americans’ net worth, compared with 40% of whites’ wealth portfolio, which is more diversified than that of nonwhite households. Yet, in 2016, the mean net housing wealth of white homeowners was $215,800, compared with only $94,400 among black homeowners.”

Again, it’s more difficult to come by government home equity data by gender, but some recent data released by Redfin can give us some context. Their research found that single women earn around 92 cents in equity for every dollar of equity that single men earn.

Redfin analyzed nearly 80,000 homes bought by single women in 18 of the largest cities in the U.S.

The gender equity gap was more pronounced in some cities than others. And in New Orleans, single women managed to gain more equity than single women. But in most major U.S. cities, single women lag in equity behind single men.

Interlocking oppressions are a big problem that extend well beyond the real estate industry, as we’ve seen. So what can you do today to help?

Understanding how interlocking oppressions have made homeownership and wealth-building harder for some Americans than for others is an important first step toward a more just and equitable society.

By keeping yourself educated and up-to-speed on these topics, whether or not you feel personally affected by them, you’re helping to establish a foundation of familiarity with social justice issues that will (hopefully) lead us to better, more productive conversations and actions moving forward.